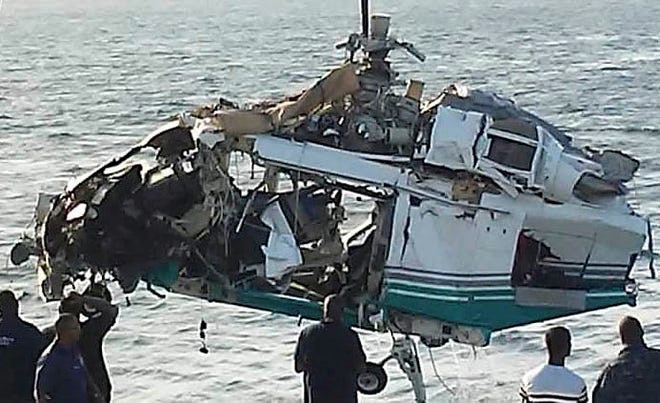 As two pilots prepared to land in the Bahamas in July 2019 on an emergency run to fly two sick newly graduated college students, two of their friends and the pilots’ billionaire boss to Fort Lauderdale, one remarked to the other: “I haven’t flown this thing in over a month until today.”

The co-pilot retorted “Bloody #,” a recently released National Transportation Safety Board transcript from the cockpit reveals. The transcript uses “#” to replace expletives.

When the pilot, Jupiter resident David Jude, responds that the helicopter has been in “the # shop,” co-pilot Geoffrey Painter replies: “Has it? What’s been wrong with it?”

Jude’s answer would in retrospect prove unnerving: “Every # thing,” he said.

The pilots landed in the pre-dawn hours of July 4 on coal magnate Christopher Cline’s private Big Grand Cay in the Bahamas and soon set off on their medical run with five more passengers.

Within minutes, the 15-passenger Agusta SpA AW139 crashed, killing all seven on board.

More than a year after the July 4, 2019, crash new details of the tragedy have emerged in National Transportation Safety Board reports released on Aug. 17.

Cline, 60, the self-made West Virginia coal billionaire whose homes included a mansion in northern Palm Beach County, had gathered with family members and their friends for a celebration of his July 5th birthday on his island in Abaco.

The chopper, piloted by Jude, 57, with co-pilot Painter, 52, went down in the ocean about one minute after taking off, records show. Their last utterance came at 1:53 a.m., nine seconds before the transcript stopped.

Besides Cline and the two pilots, on board were Cline’s daughter Kameron, 22; Brittney Searson, 21, her best friend and classmate at The Benjamin School in Palm Beach Gardens and at Louisiana State University, where they had graduated just two months earlier; Delaney Wykle, 23, a childhood friend of Kameron’s; and Jillian Clark, 22, another recent LSU graduate and fellow sorority member of Kameron’s.

About 15 to 20 family members and friends had been arriving on the island by helicopter, fishing yacht and seaplane, according to a witness statement given to investigators by Robert Hogan, Cline’s property manager on Big Grand Cay and his friend for 38 years.

People were playing chess, riding Sea-doos and playing music. They had dinner, and Hogan said he was present with everyone until 11 p.m.

Shortly after, Hogan said he was informed by a host that Kameron Cline and a friend had become ill. Hogan described the young women as “groggy and unresponsive,” and told investigators he was not sure of the cause.

Hogan said he also learned that Jude, one of Cline’s regular corporate pilots, was flying to the island to transport the two ill women, along with Cline and the other two passengers, to the United States for emergency medical attention.

The flight plan shows the helicopter having arrived from Walter’s Cay Airport in the Bahamas, and bound for Fort Lauderdale/Hollywood International Airport, where U.S. Customs was still open at that hour.

It landed on a helipad on Big Grand Cay between 1:30 a.m. and 1:45 a.m. and remained on the ground with the engines running, Hogan said. The passengers boarded and the two sick young women had to be helped onto the plane and strapped in.

Cline even brought a puppy dog with them.

The chopper lifted off, turned right, climbed three to four stories high, and accelerated with its nose down over the west end of the island for the 30-40 minute flight to Fort Lauderdale, where authorities were alerted to have two ambulances waiting for Kameron and her friend.

According to Hogan and another witness, George Russell, who was on a dock with six other people, the takeoff appeared normal. But he told investigators that he then saw the chopper’s “lights moving funny, the lights went out, and he heard an impact.”

The cockpit voice recorder shows the pilot and co-pilot in discussion over routine pre-flight steps until Painter says at 1:52:30 a.m. “Alright airspeed coming up. No, it’s not coming up. So push that nose forward. Get some airspeed.

Within seconds the sounds of an electronic voice and a warning tone filled the cockpit.

Jude asks at 1:52:56, “How high are you and three seconds later answers his own question, ”Three-hundred feet.“

Painter says, “We’re not” and Jude replies “That’s what it says over here.”

Eight seconds later, he adds: “There was a fatal accident in the UK and this is exactly what happened there.”

Jude asks “Give us a heading” three times.

Hogan said he went to bed that night, and arose at 6 the next morning and began his day as usual.

He said he began to realize something was amiss when he learned that the helicopter never made it back to the hanger where it was stationed at Palm Beach International Airport. Jude was supposed to fly Cline’s other son, Logan, to the island that day.

Hogan began calling the U.S. Coast Guard, hospitals and anyone else he could think of to see if anyone had heard from Cline. No one had. He asked the Coast Guard to begin a search.

Later that day, he learned that people on the island had heard a strange sound, like a thud, around the time the helicopter took off.

By early afternoon, a search team, including Cline’s chef and party planner, boarded a fishing boat and headed into the ocean where witnesses said they heard the strange sound.

They spotted the wreckage, the chopper’s wheels still extended, in an oily spot in the water. A diver spotted the bodies, still strapped to their seats.

They were removed from the wreckage and brought to shore where Hogan said he identified them.