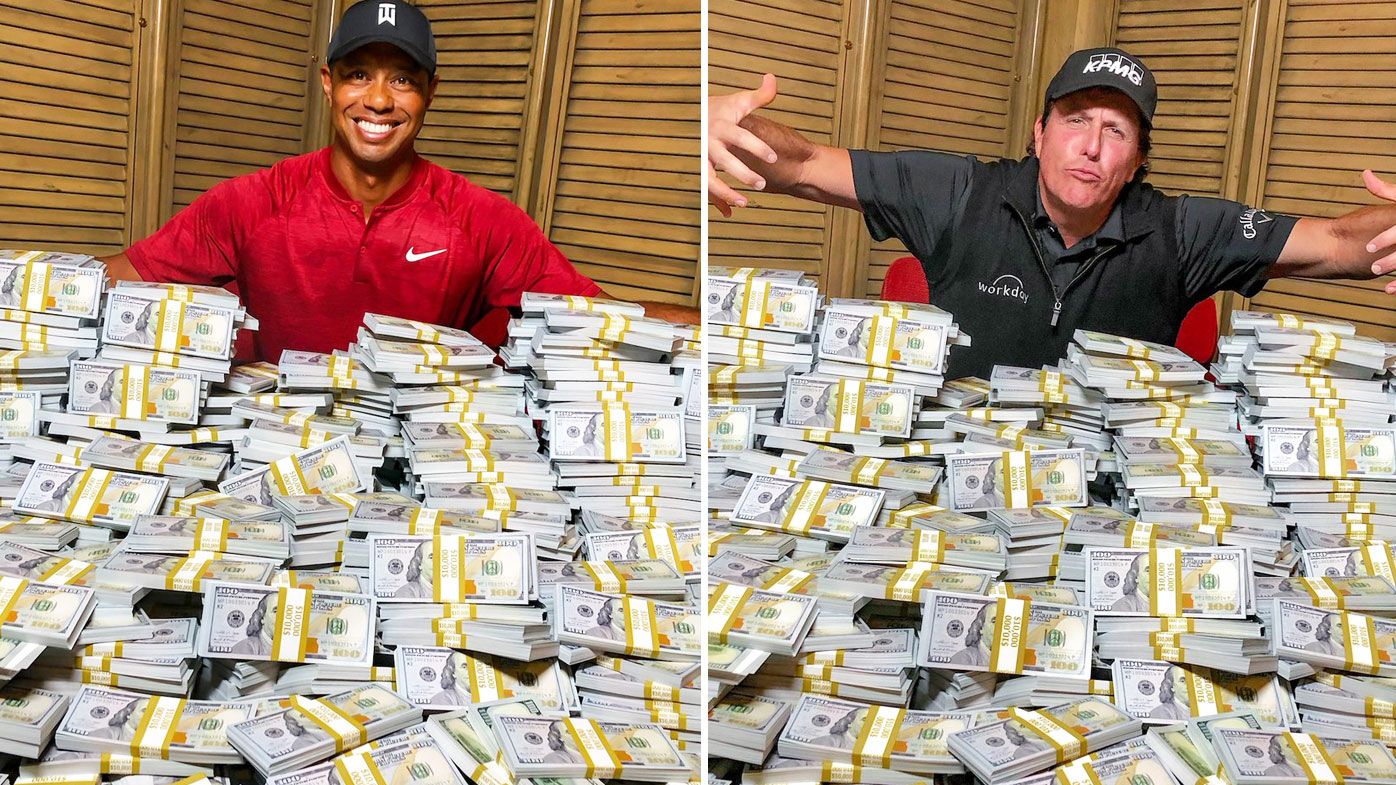 Phil Mickelson and Tom Brady took on Tiger Woods and Peyton Manning in Capital One’s “The Match: Champions for Charity” at Florida’s Medalist Golf Club on Sunday. Tiger and Phil, together again, only now partnering quarterbacks and playing to raise money in the fight against COVID-19, and with everyone wearing microphones to great effect.

Woods and Manning held on to win 1 up despite a valiant back-nine comeback by Mickelson and Brady, the latter having filled up the hole from both on and off the green. Most importantly, they raised $20 million, and The Match was pure fun to watch. Mickelson was especially chirpy early, joking that he’d brought out his “Tiger Slayer” Odyssey putter, and, fueled by coffee, was preparing to activate his calves for the long-drive contest on the third hole.

“Yes, ladies and gentlemen,” Woods said, “this is what I have to listen to every time we play.”

Not that he didn’t get some digs in of his own, later stating that he could mark his ball with the gold medal from the U.S. Open.

All told, it was another fascinating installment of Tiger and Phil. After 20-plus years of these guys, the rivalry somehow still has legs. Why is that?

The contrast in styles (righty vs. Lefty, strategist vs. seat-of-the-pants, new kid vs. more established pro) has helped; there was never any confusing one for the other. Rory McIlroy said much the same thing about the overseeded grass after winning THE PLAYERS Championship last year; he could differentiate the fairway from the rough as he stood on the tee. Contrast is everything.

But it must be the right kind of contrast. Without trying to, Tiger and Phil fit the classic rivalry mold perfectly, one side a seemingly immovable pillar of excellence (Woods, who once made 142 straight cuts) and the other a less disciplined genius (Mickelson, who hit a ball through a gap in the pines at the 2010 Masters). They were Borg and McEnroe; the old-school Boston Celtics and the Showtime Los Angeles Lakers; and Boris Spassky and bad boy Bobby Fischer.

Such contrasts allow us to access the full range of emotions, for while one side inspires awe and commands respect (82 PGA TOUR victories, 15 majors, two PLAYERS titles), the other alternately drives us mad (what do you need with two drivers?) and deliriously happy (2004 Masters, 2007 PLAYERS, 2013 Open Championship). And no, you can’t manufacture a rivalry – except in a script, where you totally can. Soviet-built machine Ivan Drago and big-hearted Rocky Balboa in “Rocky IV” come to mind, although I’m not proud of that.

For a rivalry to really work, however, both sides have to occasionally win. Competitive balance is the special sauce, and this is where Tiger and Phil almost didn’t end up clicking.

Way back in 2001 at a Mexican restaurant in Scottsdale, Arizona, Mickelson told me something that at the time seemed debatable. “When I compete with Tiger,” he said as we ate chips and salsa, “I can see myself – the line of a putt, the shot I want to hit – more clearly.”

I nodded, but Woods seemed to be in a class by himself. He had just set or tied 27 PGA TOUR records as he won nine times in 2000. Still, Mickelson had won the TOUR Championship that year, firing a 66 to overtake Woods (69) and Vijay Singh, so I wrote it in my notebook.

And it turned out he was right.

Studies have shown how sports rivals lift each other up; college and pro teams get quantifiably better in the year after their chief rival wins the championship. Long-distance runners are five seconds per kilometer faster if a top rival is in the race. So it went with Tiger and Phil.

“Although we often see them as enemies,” author Adam Grant wrote in The New York Times last year, “our rivals can be our greatest allies. You can see this in the extreme in sports.”

Tiger and Phil battled at Doral, Bay Hill, Firestone, Augusta National. We suspected that they made each other better, but now we know just how much better. As Justin Ray of The 15th Club wrote for PGATOUR.COM, for the last 15 years Mickelson has gained an average of 1.12 strokes on the field per round, but when playing alongside Woods that number has jumped to 2.00 strokes per round. So, yeah, maybe Phil really did see the shot he wanted to hit more clearly.

(Playing with Mickelson also helped Woods, although less so.)

Who won the rivalry? Woods will end his career with far more victories, but as Ray points out, on 31 occasions when both were within five of the lead going into the final round, Woods won 10 times, Mickelson nine, while Woods shot a cumulative 51 under par, Mickelson 52 under.

That they’ve grown into the rivalry perhaps shouldn’t surprise us. For as Grant, an organizational psychologist at Wharton, also wrote in The Times, “If you build a supportive relationship with that rival, it can elevate your performance even further.”

Tiger and Phil took it to another level when they committed to the Ryder Cup Task Force after the U.S. Team’s lopsided defeat at Gleneagles in 2014, and are now closer than ever. Mickelson is even planning to move to South Florida; you can just imagine Phil knocking on Tiger’s door to ask if he can come out and hit some bombs, and Tiger rolling his eyes and agreeing.

So, yes, they’ve made each other better on the course, but also off it. They’ve made Brady and Manning better, and at the Medalist on Sunday, all four of them did their part to make even the ongoing pandemic better. Even as we anticipate the twilight of their competitive careers, the rivalry between Tiger and Phil continues to elevate us all.