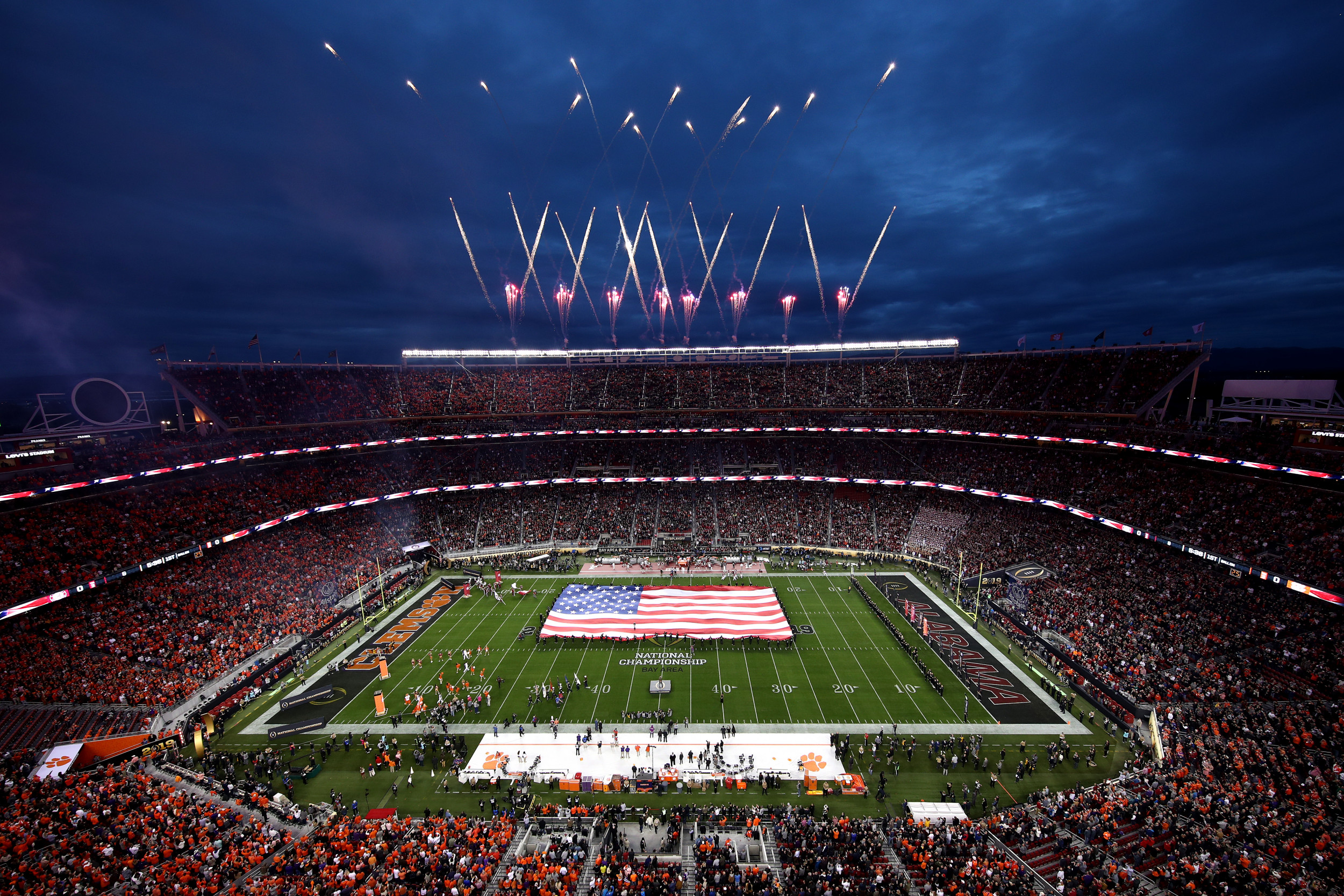 We might be close. The return of sports appears to be on the horizon. Sports have obviously been on pause in the middle of the Coronavirus pandemic, but there are signs of things returning. UFC is already back and the MLB and NBA are continuing to figure out how they can get back this summer.

While off-the-field news has kept the sports world somewhat alive, it’s safe to say that sports fans are thirsty for the athletes to get back on the field of competition. We’re itching to watch live major sporting events, not throwbacks from decades past.

And as the coronavirus pandemic continues to unfold, society appears to be gradually nearing a return to normalcy — or the new normal. There are still many challenges facing all of these leagues, with safety and the financials major sticking points for potential returns. How soon will they all be back, exactly? Here’s a look at the latest news surrounding the major sports leagues and when we might see them in action again.

America’s Game hasn’t been impacted too heavily by the pandemic because the NFL is in its offseason, which has been conducted virtually so far. The virtual draft, held April 23-25, was actually pretty entertaining, with cameras around the country capturing coaches, players, and executives making power moves from their home offices, oftentimes with kids in tow.

The league released its regular-season schedule last week, and the first game (Chiefs-Texans) is scheduled for Sept. 10. There doesn’t seem to be a backup plan in place; all public indications are that the league is expecting to hold its season as planned, though it’s all but guaranteed that there will either be no or limited fans in attendance.

Training camps are slated to open in mid-July, though team facilities have been closed since mid-March. There’s also been some talk about teams potentially changing their training camp locations if they can’t use their own because of local lockdown rules. However, despite the NFL’s apparent public confidence, sticking to the normal plan is far from certain.

Gerardo Chowell, the chairman of the Department of Population Health Sciences at Georgia State’s School of Public Health in Atlanta, told the NY Times: “The reality is when we look at the numbers there’s substantial uncertainty in the predictions. Even looking six or eight weeks ahead is very difficult right now.”

The NBA was the first major U.S. league to suspend competition, doing so on March 11 after Jazz center Rudy Gobert tested positive for coronavirus. At that point, teams were well into the 2019-20 season, with all squads having played between 63-67 games (there are 82 in the season).

Though there isn’t yet a set date for the league resuming play, it’s appearing more likely that this season will be completed — to LeBron’s delight. Commissioner Adam Silver led a virtual board of governors meeting Tuesday that reportedly ended with attendees “feeling increasingly positive about the league’s momentum” toward getting back in motion, according to Woj. And while we don’t know when the NBA might be back, Shams did report that Silver is going to make a decision within 2-4 weeks on the future of the season.

It seems the league office and National Basketball Players Association have been having encouraging conversations about minimizing health risks and addressing players’ desire to get back on the court and see this thing through. If they do not play out this season, players will have a significant portion of their salaries canceled — but it seems like things are trending in the direction of the NBA coming back at some point.

Baseball suspended play March 12 after spring training had gotten rolling, and it seemed like the MLB would be the American league most heavily impacted by the pandemic, given that its long season had just begun. However, commissioner Rob Manfred reportedly presented a proposal to players this week that outlined the league’s mission to get back to business by early July. There would only be 82 games in the season — so it’d be about half the normal length — but at this point, having any type of MLB season has to be exciting for fans. In the proposed plan, teams would play in their home stadiums, but travel would be reduced by only playing against division opponents and teams in the corresponding division from the other league. For example, NL Central teams would play AL Central teams. Extra playoff teams are also included in the proposal to the MLBPA.

Nonetheless, ESPN reported that conversations between the league and the MLB Players Association are expected to be “contentious,” with disagreements centering on economics. It all comes down to the financials. Owners are concerned about losing revenue from playing games without fans in attendance, and naturally players want their bread as well. This could impact the league’s return date.

There were reports that MLB was considering starting up in May with all games played in Arizona, but that no longer appears to be in the mix.

MLS, which suspended play March 12, had some teams return to limited training last week, with players allowed to train on their own outdoors. Sounds lonely.

There are three phases in the league’s current plan. The first, individual training, has now been checked off. Next comes players training together in small groups, followed by full team practices. For the MLS, it’s a gradual getting-back-together thing. Dates for the next two phases have not been determined.

There also is not yet a firm date for play to resume, though June 8 has been floated as the earliest possible return date.

According to ESPN, the league will likely be modifying its season’s structure, and a tournament played over about a month and a half in multiple locations is the most likely outcome. A number of regional sites — including L.A., Dallas, Orlando, and K.C. — are reportedly in the mix to host.

It appears the MLS Cup will likely be played in January or February 2021, so we should see a 2020 league champ crowned…eventually.

The PGA Tour had just played through the first round of the Players’ Championship when it was suspended March 12. Then the British Open, set for July, was shut down.

The other three majors were rescheduled. The PGA Championship is set for Aug. 6, the U.S. Open on Sept. 17, and the Masters on Nov. 12. For reference, the Masters is typically played in April.

The Tour plans to resume in mid-June in Texas. No fans will be in attendance, though, and there will also be coronavirus testing onsite for players, caddies, and employees. We will have golf on TV soon.

The English Premier League is set to get back underway June 1 provided things play out as expected. The league received governmental permission to resume in a 50-page document dubbed “Our Plan to Rebuild.” The government’s plan permits “cultural and sporting events to take place behind closed doors for broadcast, while avoiding the risk of large-scale social contact.”

The German Bundesliga is set to resume in empty stadiums on May 16, and Spain’s La Liga will come back June 12.

Euro 2020 — obviously, the huge draw this year for soccer fans — was sadly postponed by one year. The women’s event was scheduled for 2021 in England, so that’s been delayed one year, too, shifting to 2022.

The WNBA did hold its draft (word to Sabrina Ionescu) virtually April 17 but the start of its season, slated for May 15, was delayed indefinitely. It now appears the season will either be played without fans or canceled. The season typically runs May-October. The NBA’s dynamic planning will obviously impact the WNBA’s return as well.

No Olympic Games this year. The Tokyo Games are now slated for July 23, 2021, and the Paralympics will take place in August 2021.

The NCAA cut off spring sports March 12, including canceling March Madness (sheds tear). Spring-sport seniors were granted an extra year of eligibility. As of today, NCAA football is still scheduled to be played as planned in the fall, though there’s a ton of debate about whether that’s responsible.Though qualifying events for the men’s World Cup have been postponed, it appears the next World Cup is still on pace for 2022.

The NHL only had about 12 games left in its regular season when its season was suspended March 12. Commissioner Gary Bettman, however, sure seems confident the season will be finished. It will likely return around the same time as the NBA. The NHL draft, originally set for June 26-27 in Montreal, has been postponed.

The UFC is chugging along. Following its first major card this past weekend — Justin Gaethje crushed Tony Ferguson — UFC has additional cards planned for Wednesday (May 13) and Saturday (May 16). The never-bashful Dana White has been full-steam ahead through the pandemic. He still seems keen on the idea of Fight Island.