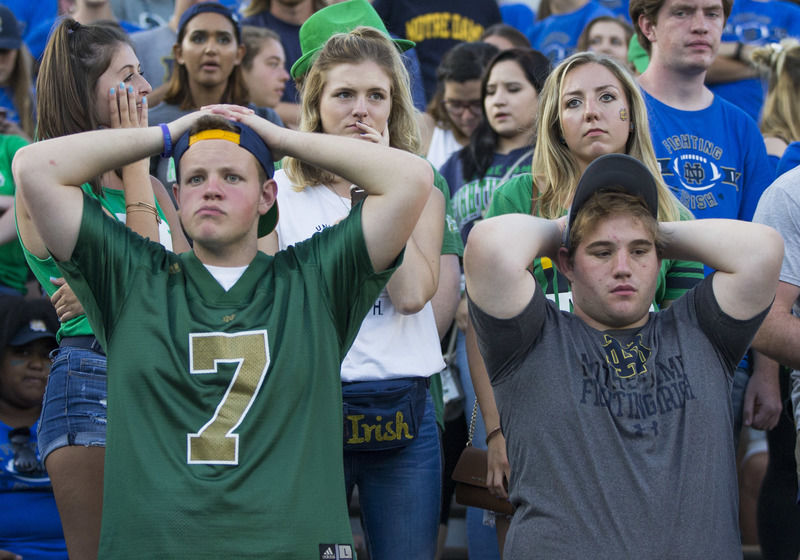 The year is 1988. The President of the United States of America was Ronald Reagan. The Winter Olympics took place in Calgary and the Summer Olympics were held in Seoul, candidates Michael Dukakis and George Bush competed for the U.S. presidential election, the Soviet Union withdrew its troops from Afghanistan, NASA’s Space Shuttle program resumed launches following the 1986 Challenger disaster, a passenger aircraft was brought down by a terrorist bomb over Lockerbie, Scotland, and much more.

It was also the last time the Fighting Irish of Notre Dame won a National Championship. Thirty two years ago.

The year is 1997. ‘Titanic‘ was a box office hit, the world was mourning the shocking death of Princess Diana, Bill Clinton was starting his second term as President, George Clooney was the Sexiest Man Alive and the first Harry Potter book was published. Remember The Teletubbies? They were unleashed in 1997.

It was the last time the Michigan Wolverines won a National Championship. Twenty one years ago.

The year is 2001. Gas was $1.46 a gallon, the average cost of a new house was $136,000 and a dozen eggs were 90 cent. Known simply as 9/11, on September 11, 2001 nineteen hijackers simultaneously took control of four U.S. domestic commercial airliners. The hijackers crashed two planes into the World Trade Center in Manhattan, New York City one into each of the two tallest towers. Within two hours, both towers collapsed. The hijackers crashed the third aircraft into the U.S. Department of Defense headquarters, the Pentagon, in Arlington County, Virginia. The fourth plane crashed into a rural field in Somerset County, Pennsylvania, following apparent passenger resistance.

It was also the last time the Miami Hurricanes won a National Championship. Nineteen years ago.

You see, the Tennessee Volunteer fan base isn’t like most. They’re brash. They’re passionate (to an absurdly extreme level). They’re the nicest fans you’ll meet if you’re an opposing fan on a trip to Knoxville for a good ‘ole fashioned tussle in Neyland. Hospitable. Kind. But Crazy.

“Every fan base is like that.” Ha, no. No sir and no ma’am. I beg to differ. The expectations at Tennessee of course are sometimes unrealistic and far fetched, but they’ve never been more out of reach than they are right now in 2020. Tennessee has to learn to be relatable with the moment.

It’s the pandemic season we will all soon forget once it’s reached its end. No spring practice, no timely manner of operations, it’s a week by week wonder if you’re even going to be able to play your next scheduled opponent. It’s 2020. It’s uncertainty. It’s where we are.

Get relative with the times, Vol Nation.

The beatdowns from Georgia and Alabama weren’t shocking to you, the Kentucky loss was. You’re not upset at Jarrett Guarantano, you’re mad at Jeremy Pruitt for keeping his faith in him. You don’t want to fire Jeremy Pruitt, you’re just flabbergasted as to why this season is going the way that it is after an 8 game win streak against less than mediocre opponents got gutted.

Calm down. Patience is a virtue.

“We’ve been patient for 22 damn years! I’m done being patient. Look at Georgia!!!”

Yes, the same Georgia who hasn’t won a national championship since 1980. Noted!

That is the goal, isn’t it? To win the big one. The jackpot, if you will. Why play if not to win the biggest prize the game has to offer? You think people buy Powerball tickets in hopes to win $2 or $275M? Easy answer.

Look, I don’t have the answers for Tennessee football right now. But I do know what the answers are not. You can not fire Jeremy Pruitt. You still owe Butch Jones the motherload and Pruitt just signed an extension, so UT would be paying him for the rest of eternity if they fired him today. Not gonna happen. Get relative with the moment.

Move on from Jarrett Guarantano? Absolutely. What better time to do it than right now during a wash of a year. The season nobody is going to remember. The season with quality opponents still left on the schedule for the future of the program to get experience against. Now is the time. This is the biggest thing I believe Jeremy Pruitt isn’t understanding. It’s been time to move on from #2. He never should’ve replaced Dormady after the Georgia Tech win three years ago. But, again, where are where we are.

If Notre Dame, Michigan and Miami fans can exude patience, why can’t Tennessee? I don’t see Irish fans or Wolverine fans get worked up when their rival beats their ass. Or how about poor Miami? Florida State? Their program is in literal shambles. I don’t hear any noise out of Seminole faithful. Or maybe I don’t go looking for it. I’m sure it’s there, but not like it is on Rocky Top.

Tennessee is a program still trying to find its stability after Lane Kiffin left in 2009. Nobody in Knoxville, Tennessee will disagree with that statement. It simply has not recovered since that night. Period, end of story.

That is the goal for Tennessee right now. Stability. Find the boat. Get out of the water. Quit drowning, get to shore. And be patient and hopeful that your rescue arrives sooner rather than later.