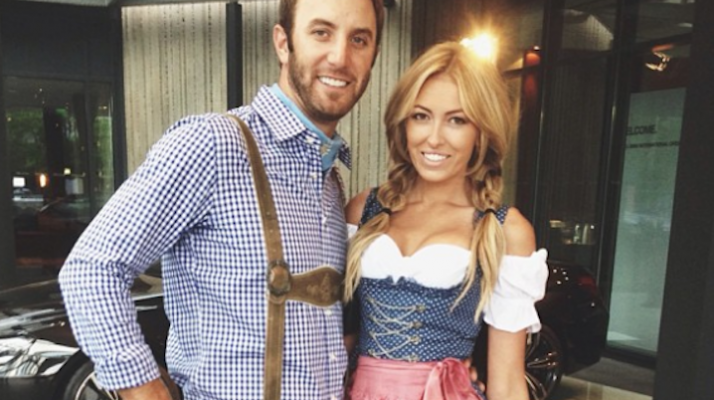 It’s no secret that professional golfers have a knack for picking up attractive women. After all, golf is a gentleman’s game! The PGA Tour seems to bring out some of the most beautiful fans in sports as girlfriends and wives line the fairways and greens to root for their loyal companions.

If you are not familiar with Erica Stoll, allow us to introduce you Rory’s new bride. She is 29 years old and was born in New York but lives in Palm Beach Gardens, Florida. The pair met at the 2012 Ryder Cup in Medinah. As the story goes, McIlroy slept in by accident and was close to missing his Sunday singles tee time. However, Stoll saved the day by waking him up and arranging a police escort to get him there on time.

If that isn’t true love, we don’t know what is. The tied the knot in April 2017 at an elaborate wedding at an Irish castle.

Allison Stokke became an internet sensation courtesy of a photo snapped of her during a high school pole vaulting competition back in 2008. She went on to become an All-American at the University of California and pursued a spot on the U.S. Olympic team before becoming a model and spokesperson. She and Rickie Fowler have been dating since 2017 and became engaged in 2018.

Paulina Gretzky is known for many different things, including being Dustin Johnson’s partner and mother of their two children. She is also the daughter of The Great One, Wayne Gretzky, as well as a model. It is pretty obvious why she is one of the more popular ladies of the PGA Tour.

Justine is the total package. She is a registered nurse, and even started her life as a swimmer and soccer player. She has also always considered golf a big hobby of hers. She also acted as Patrick Reed’s caddie in 2012 and 2013 as Reed made his way on the PGA Tour. The two got married in 2012 and had their first baby a year later.

Luke Donald met his wife of nine years at Northwestern University where he played his college golf. The gorgeous brunette and her husband share one child together. On that note, they sure do make a great looking family.

Jordan Spieth’s high school sweetheart has been by his side since the beginning. Their relationship remained strong even when they went to separate colleges. Annie Verret attended Texas Tech when Spieth was carrying the University of Texas golf team squarely on his back. She maintained a 4.0 GPA at Texas Tech and is an event coordinator at The First Tee of Greater Dallas, which helps underprivileged kids find a passion for the game of golf. Beauty and brains!

Dowd Simpson’s smile is what has us begging for more. The blonde beauty has three children with Webb Simpson, who seems more than happy to have her as his wife. The two tied the knot in 2010. She is always seen hanging out with the next wife on our list at Ryder Cup events and other tournaments throughout the years.

We’ve loved watching Amy follow Phil around his entire career. We can never look away when she meets him on the 18th green of a Mickelson victory with their kids following close behind. Amy is a former cheerleader for the Phoenix Suns and a breast cancer survivor.

Keegan Bradley and longtime girlfriend Jillian Stacey actually grew up minutes away from each other. Despite that fact, they only dated a short time before getting married at the end of 2016! Stacey does photo shoots for Golf.com while she isn’t following Bradley around on Tour.

Ellie came from humble beginnings. She grew up a country girl, once excelling in the Future Farmers of America’s national dairy foods competition. She caddied for for her husband Jason Day in the traditional Masters Par-3 contest and is a fixture at PGA Tour events. They now have two children, Dash and Lucy.